The Danske Bank Premiership encounter at Solitude is the final home game of the full-back’s loan move from Derry City, which will be upgraded to a permanent switch when the Transfer Window opens, and McDermott is delighted to have extended his stay in north Belfast.

“It was brilliant because it was going on a couple of months with negotiations and I didn’t really know where I would be playing my football in January,” he explains.

“It was great just to get it out of the way and I’m fully focused on playing my football at Cliftonville now and doing the best I can for the Club. Hopefully now we can kick on.

“We haven’t won in three games – we drew against Larne and lost the last two, so getting back to winning ways is a must for us.” 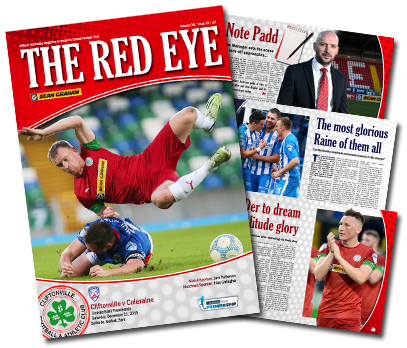 You can read the full McDermott interview in this weekend’s edition of our Matchday Magazine, which will be on sale at Solitude for £3.

Featuring pre-match views from the Manager’s Office, The Red Eye’s 15th issue of the campaign carries the latest addition to your poster collection, assesses the Bannsiders’ title prospects and steps 112, 84 and 17 years back down memory lane – plus plenty more besides.