The Reds approach tomorrow’s Danske Bank Premiership clash with Glentoran having conceded the fewest goals of any side in the top flight and, though much focus has been on the team’s stylish attacking threat, Harney is delighted to be playing a key role at the other end of the park.

“I feel that Paddy’s given us the confidence as a back four, plus the determination and the bite in our game that we always knew we had but maybe we lost it along the way last season,” he explains.

“He likes us to get it down playing – which we do, or try to – but we know if we keep a clean sheet, we’re going to be very close to winning any game because of the strikeforce we have.” 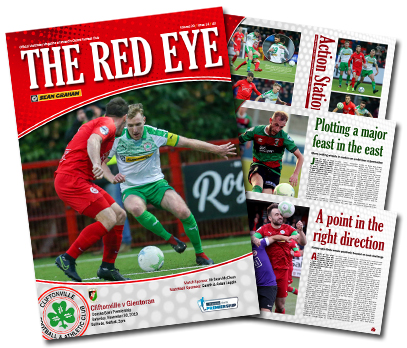 You can read the full Harney interview in this weekend’s edition of our Matchday Magazine, which will be on sale at Solitude for £3.

Featuring pre-match views from the Manager’s Office, The Red Eye’s 14th issue of the campaign carries the latest addition to your poster collection, reviews the Glens’ rejuvenation process and steps 112, 79 and 28 years back down memory lane – plus plenty more besides.

Members Tickets, Season Tickets and Family Tickets are valid for this fixture and can be used to access the Main Stand Lower.