Though players facing a former Club is a common theme in football, Seanna Foster finds himself in a particularly curious situation as Cliftonville prepare to host Warrenpoint Town in the Danske Bank Premiership.

As well as tackling his ex-employers, tomorrow’s encounter will also see the full-back come up against the very Manager who brought him to Solitude – but under whom he never got to work.

Barry Gray signed Foster up on a pre-contract agreement back in January but had left the Reds by the time the defender made his summer switch from the Point. Even so, the 21-year-old remains grateful to the returning Town boss for giving him the opportunity to move to BT14.

“The only experiences I’ve had with Barry is meeting him a couple of times before signing with the Club,” says Foster.

“The things that he said when I was signing with Cliftonville were unbelievable and you couldn’t turn away that opportunity for anything. Especially being from west Belfast, it’s a Club you dream of playing for. 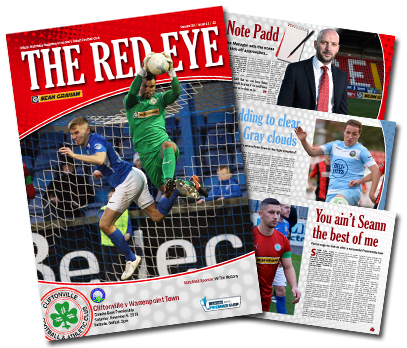 You can read the full Foster interview in this this weekend’s edition of our Matchday Magazine, which will be on sale at Solitude for £3.

Featuring Paddy McLaughlin’s pre-match views, The Red Eye’s 11th issue of the campaign carries your latest player poster, reflects on Warrenpoint’s bid to turn their fortunes around and steps 90, 73 and 51 years back down memory lane – plus plenty more besides.

Admission
Tickets are not required for this fixture, for which cash turnstiles will be in operation.