Cliftonville will face Barry Town United in the Europa League Preliminary Round.

This afternoon’s draw at UEFA Headquarters in Nyon pitted the Reds with the Welsh side, who finished third in last season’s JD Premier League.

Unable to use their Jenner Park ground for European football, Barry – otherwise known as The Dragons – will instead utilise Leckwith Stadium in Cardiff for the home leg of the tie, which is the Glamorgan side’s first continental challenge since they were beaten by Vardar of Macedonia in a 2003 Champions League qualifier.

The contest will, meanwhile, represent the Reds’ second Euro meeting with opposition from Wales, having been eliminated from the Europa League by The New Saints back in 2011.

The first leg of the contest with Gavin Chesterfield’s side is scheduled for June 27 with the return game taking place on July 4 and, while all arrangements remain subject to change, supporters are urged against making any travel arrangements whatsoever until both fixtures have been officially confirmed by the Club. 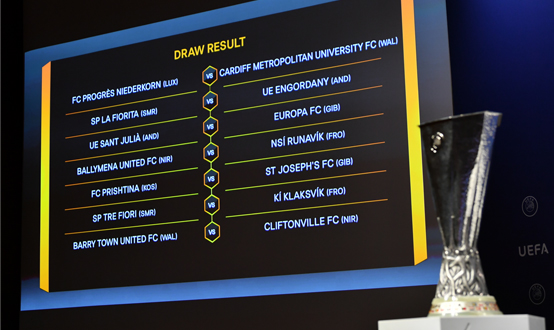 Reds Chairman Gerard Lawlor was present at today’s draw in Switzerland and will communicate details of the tie when they have been ratified with both UEFA and our counterparts at Barry Town United.