Ryan Catney says the thought of being centre of attention leaves him uncomfortable ahead of his Testimonial Match tomorrow, but is grateful to the Club for organising the occasion on his behalf.

Cliftonville take on a Tommy Breslin XI at Solitude (2pm) in what will be Catney’s final appearance for the Reds following 12 years of dedicated service since arriving from Lisburn Distillery.

Billed as an Irish League All-Star side, the opposition consists strongly of members of Breslin’s back-to-back Premiership winning teams – plus a handful of others – and Catney is looking forward to meeting old pals on what he admits will be an “awkward” day for him.

“I’ve never been one to hog the spotlight and have always put the team before any personal accolades, so I think I might find the whole occasion a bit awkward at times – although it will be great to catch up with so many friends,” he explains.

“I’m grateful to the Club for organising and staging this match as well as my Testimonial Dinner at the end of the month. They didn’t have to do any of this for me.”

The midfielder, who won two Premiership titles, four League Cup crowns and three County Antrim Shield honours with Cliftonville, also expressed his thanks to Chairman Gerard Lawlor for his guidance and assistance over the years.

“This Club would not be where it is without him and I can’t give him enough praise for everything he’s done for me personally,” he adds.

“He’s truly a friend for life. The fans have been amazing, too, and I thank every single one of you for all your support.” 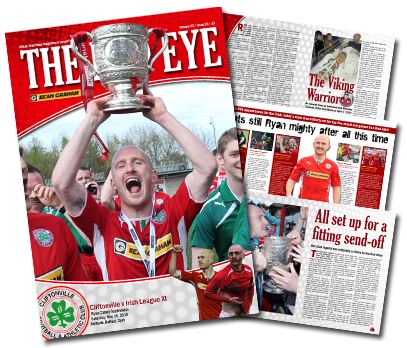 You can read all of Catney’s recollections of life at Solitude in tomorrow’s special jam-packed edition of our Matchday Magazine, which will be on sale for £3, with all proceeds going to Ryan’s Testimonial Fund.

Alongside Red Arnie’s Catney-themed quiz, The Red Eye’s 28th and final issue of the season sees the 32-year-old talk us through his Dream Cliftonville XI, reflect on his battle back from a broken leg and choose the five stand-out matches from his 396 appearances for the Club – plus plenty more besides.