Joe Gormley believes his overall game is improving with each new outing – but says he’s determined to return to the goal trail when Cliftonville host Crusaders tomorrow.

Cliftonville’s all-time leading scorer has not recently found the net with the regularity supporters have grown accustomed to and, pleased though he is to contribute to the wholesale team effort with a number of assists lately, the 29-year-old would love to celebrate another North Belfast Derby strike.

“I’ve not scored as much goals recently as I’ve wanted, hopefully I can get a goal this weekend,” he says.

“I’ll always prefer the three points but we’ll give a good account of ourselves and take it from there.

“I always want to improve as a player and I know my strengths aren’t playing with my back to goal. I try and work on it a bit and hopefully I can get better at it and it will improve my all-round game.” 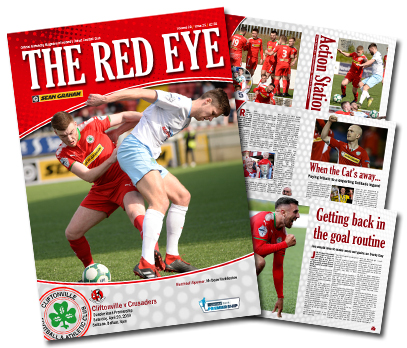 You can read the full Gormley interview in tomorrow’s edition of our Matchday Magazine, which will be on sale at Solitude for £2.50.

Alongside your latest player poster, The Red Eye’s 25th issue of the campaign reflects on Ryan Catney’s 12 years in a Cliftonville jersey, assesses the Crues’ bid for a strong finish to the campaign and steps 122, 84 and 23 years back down memory lane – plus plenty more besides.