Jamie Harney says Cliftonville’s players must continue to push eachother to be the best they can be as they seek a strong finish to their Danske Bank Premiership campaign.

Ahead of tomorrow’s home game with Ballymena United, the 23-year-old central defender – who scored in last week’s comeback victory over Coleraine at Solitude – says it’s important for standards to be raised on an ongoing basis.

“We have a bit of momentum building, but the first-half against Coleraine was a reminder that we can’t get too complacent,” he says.

“We have to keep on top of ourselves, even though we’ve had a few good results under Paddy and he reminded us of that at half-time and even after the game.

“We have to keep our standards high and make sure we keep at each other and push each other to get the best out of everyone.” 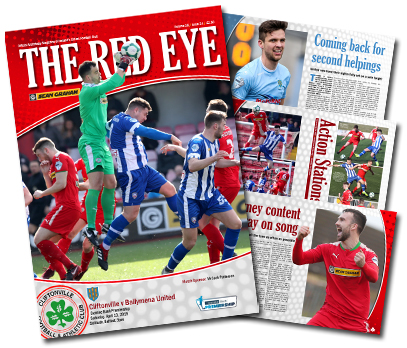 You can read the full Harney interview in tomorrow’s edition of our Matchday Magazine, which will be on sale at Solitude for £2.50.

Alongside your latest player poster, The Red Eye’s 24th issue of the campaign reflects on last week’s victory over Coleraine, assesses the Sky Blues’ bid to secure the League’s runners-up berth and steps 34, 51 and 88 years back down memory lane – plus plenty more besides, including an exclusive back-page image that is sure to be of interest to aficionados of all things Cliftonville.