Ryan Curran believes Cliftonville will only continue to improve under the guidance of Paddy McLaughlin.

The fifth win of the new Manager’s seven games at the helm was achieved courtesy of Curran’s injury-time strike against Glentoran last weekend and, as the Reds prepare to host Coleraine in their first fixture of the Danske Bank Premiership’s post-split schedule tomorrow, the former Ballinamallard United goal ace says he and his team-mates are seeking momentum for a strong finish to the campaign.

“Paddy wants good results, but I think he also wants good performances as well, leading into the Play-Offs and then next season,” says the 25-year-old.

“It’s probably not a coincidence that, since Paddy’s come into Cliftonville, we’ve tried to play a bit more. He’s put a big emphasis on attacking in training and also defence and keeping clean sheets.

“We know that, going forward, we’re going to get better, it’s taking us a while but hopefully we’ll get better as time goes on.” 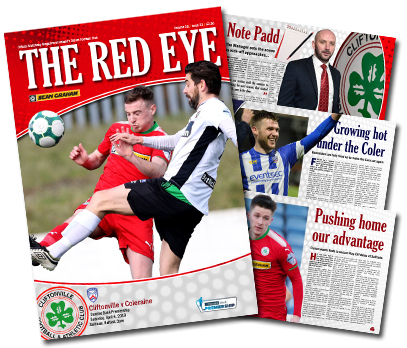 You can read the full Curran interview in tomorrow’s edition of our Matchday Magazine, which will be on sale at Solitude for £2.50.

Alongside your latest player poster, The Red Eye’s 23rd issue of the campaign reflects on last week’s victory over Glentoran, examines the Bannsiders’ Play-Off prospects and steps 116, 73 and 48 years back down memory lane – plus plenty more besides.