As Cliftonville prepare to bid 2018 goodbye with their final fixture of the calendar year, Ruairi Harkin is hopeful that tomorrow’s Danske Bank Premiership clash with Linfield can be the start of something better from a personal perspective.

The midfielder has endured two years of injury woe but, having made substitute appearances in the recent encounters with Dungannon Swifts and Crusaders, is keeping his fingers crossed that he can enjoy a prolonged spell in the Red shirt throughout the second half of the season.

“I’ve worked hard over the past couple of months to get back into a position where I’d be fit enough to feature,” he says.

“Over the last few weeks, I’d been playing in reserve games to get the match fitness up, which caused it to flare up a wee bit and resurrect so I’ll get a second opinion on it and hopefully I’ll be good to feature over the Christmas period.” 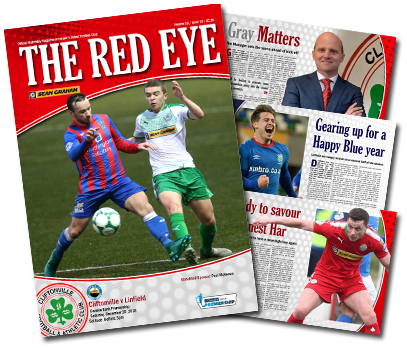 You can read the full Harkin interview in tomorrow’s edition of our Matchday Magazine, which will be on sale at Solitude for £2.50.

Alongside a heartfelt tribute to our much-missed former groundsman Paddy Madden, The Red Eye’s 16th issue of the campaign – a double-publication alongside the midweek clash with Crusaders – reflects on the Blues’ season to date and steps 40, 122 and 135 years back down memory lane – plus plenty more besides.

Admission
Tickets are not required for this fixture and cash turnstiles will be in operation.