The Reds have won their last eight outings at Solitude – a statistic that Garrett believes can inspire the team going into today’s action.

“We’re going into the game after two very good home victories in a row,” he explains.

“The 5-1 against Dungannon was more comfortable than the win over Glenavon. We had to go toe to toe with them and, with 20 minutes to go at 2-2, we were thinking could we go on and win it?

“Thankfully we finished the match strongly and ran out worthy winners.

“If we’re on our game like we have been for the last couple of weeks, then there’s no reason why we can’t get a result.” 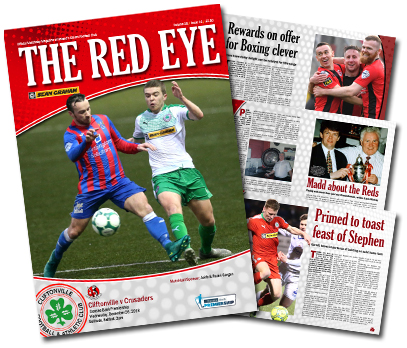 You can read the full Garrett interview in this afternoon’s edition of our Matchday Magazine, which will be on sale at Solitude for £2.50.

Alongside a heartfelt tribute to our much-missed former groundsman Paddy Madden, The Red Eye’s 16th issue of the campaign reflects on recent Christmas Derby duels and steps 40, 122 and 135 years back down memory lane – plus plenty more besides.

Admission
This is an all-ticket fixture for Cliftonville supporters, however Members Tickets, Season Tickets and Family Tickets remain valid for use.