After a tricky start to the season, the County Tyrone side – who visit Solitude as the competition’s defending Champions – have enjoyed an upturn in recent weeks, leading Lavery to warn against taking their threat lightly.

“You can’t underestimate any team, especially in a cup competition,” says the 22-year-old.

“It’s always on the day in a cup competition – it’s just a case of working hard, doing what we’re good at week in, week out and hopefully we can get the result and progress to the last four.” 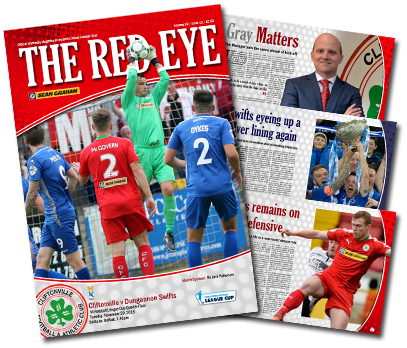 You can read the full Lavery interview in tonight’s edition of our Matchday Magazine, which will be on sale at Solitude for £2.50.

Alongside boss Barry Gray’s pre-match views, The Red Eye’s 13th issue of the campaign reflects on Dungannon’s campaign to date and steps 19, 81 and 132 years back down memory lane – plus plenty more besides.

Members Tickets, Season Tickets and Family Tickets are NOT valid for this match.