Levi Ives says Cliftonville are determined to put their early-season inconsistencies behind them, starting with three points against Warrenpoint Town tomorrow.

Just five weeks have passed since the Reds contrived to turn victory into defeat during an injury-time horror-show against the same opponents and, though the County Down side have not tasted any Danske Bank Premiership defeats since then, Ives believes the Reds are primed to start giving a better account of themselves.

“Warrenpoint have already taken three points off us this season – we have to make sure it doesn’t happen again and start to find a run of form,” says the 21-year-old.

“We need to to kick on because in the first 10 games we haven’t done much, but I think it will click soon and we will push on from there.”

You can read the full Ives interview in tomorrow’s edition of our Matchday Magazine, which will be on sale at Solitude for £2.50. 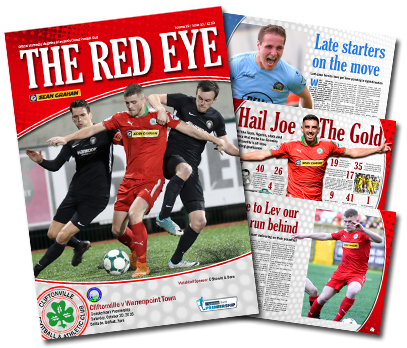 Alongside boss Barry Gray’s pre-match views, The Red Eye’s 10th issue of the campaign reflects on the Point’s stunning upturn in form, steps 112, 39 and 28 years back down memory lane, toasts Joe Gormley’s record-breaking goalrush – and plenty more besides.