The Reds approach the League Cup Second Round clash on the back of a weekend draw with Linfield that topped their Premiership tally up to five points from four outings.

Having either scored or conceded result-changing goals in the closing minutes of every domestic fixture so far this term, Gray acknowledges his men aren’t quite at the levels they have set for themselves.

“We’re not a million miles away, though,” he says.

“We’re being held back by fine margins at the minute but I truly believe one win can set us off and really get us going. Hopefully we can get that win tonight and try to build up a head of steam for our next run of Premiership fixtures.”

You can read the Manager’s full pre-match views in this evening’s edition of our Matchday Magazine, which will be on sale at Solitude for £2.50. 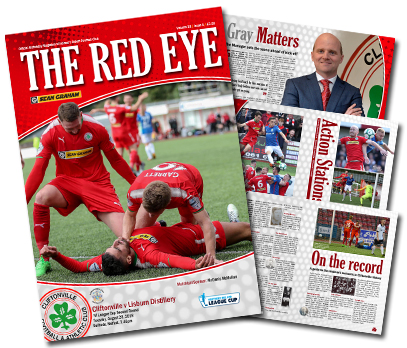 Alongside a review of the Whites’ season to date, The Red Eye’s fourth issue of the campaign reflects on some of the more obscure records in Cliftonville’s history, steps 62, 45 and 36 years back down memory lane, plus plenty more besides.

Members Tickets, Season Tickets and Family Tickets are NOT valid for this match.