Garry Breen says Cliftonville must start doing themselves justice as they prepare for tomorrow’s Danske Bank Premiership clash with Linfield.

The Reds return to Solitude on the back of a frustrating 1-1 draw with Dungannon Swifts last time out and, with last-gasp goals having changed the complexion of every domestic fixture so far this term, Breen is determined for the real Cliftonville to break through.

“We know if we play our own game – on any given day, once we do listen to Barry (Gray) and what he wants – we don’t need to worry about anyone else. We just need to worry about getting what Barry wants done right on the pitch and the result will take care of itself after that.”

You can read the full Breen interview in tomorrow’s edition of our Matchday Magazine, which will be on sale at Solitude for £2.50. 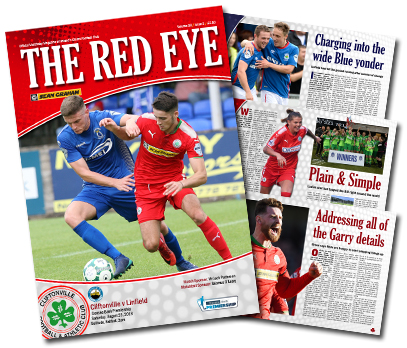 Alongside boss Barry Gray’s pre-game views, The Red Eye’s third issue of the season catches up with Cliftonville Ladies star Billie Simpson in the aftermath of the goal that made global headlines, reflects on a summer of change for the visitors and steps 112, 84 and 29 years back down memory lane, plus plenty more besides.