Liam Bagnall is looking forward to Cliftonville’s first Solitude date of the Danske Bank Premiership season and hopes that the exploits of recent weeks can help inspire victory over Coleraine.

The Reds, who commenced their domestic programme with a late defeat of Glentoran last time out, play host to the Bannsiders tomorrow and Bagnall believes those hard-earned points, combined with home advantage, can play a significant role.

“I can’t wait to get going again at Solitude,” he says.

“It will be great to get back out there and, after two testing European games and the late win against Glentoran, we hope they’ll stand by us. We hope to bring the confidence of the injury-time winner into this game and hopefully we’ll make it two wins from two.”

You can read the full Bagnall interview in tomorrow’s edition of our Matchday Magazine, which will be on sale at Solitude for £2.50. 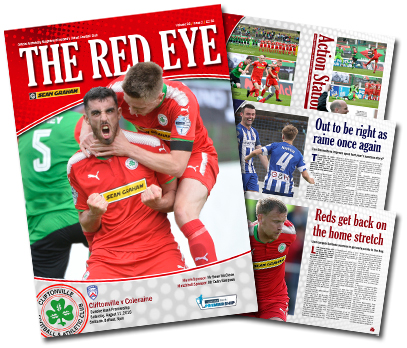 Alongside boss Barry Gray’s pre-game views, The Red Eye’s second issue of the season celebrates Cliftonville Ladies’ recent County Antrim Cup success, considers the Bannsiders’ prospects for the campaign ahead and steps 34, 31 and 17 years back down memory lane, plus plenty more besides.