Seven days on from defeat to Coleraine in that particular contest, the Reds find themselves one game away from European qualification and Gormley – who netted a double in Wednesday night’s Semi Final victory over Ballymena United – is determined to make the most of it.

“We had a job to do against Ballymena and thankfully got the job done,” says the 28-year-old.

“[Saturday’s] is a huge game and probably just as big as the Irish Cup Final. We need European football and we’re looking forward to the game.”

You can read the full Gormley interview in this tomorrow’s edition of our Matchday Magazine, which will be on sale at Solitude for £2.50. 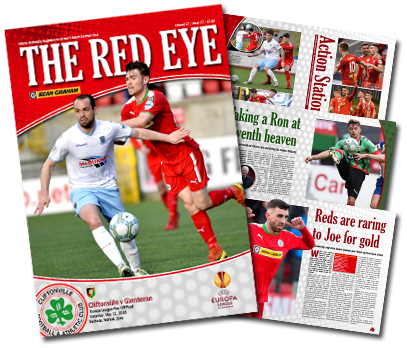 In addition to boss Barry Gray’s pre-match views, The Red Eye’s 27th and final issue of the season also steps 90, 101 and 112 years down memory lane and completes your 2017/18 poster collection – and so much more besides.

Admission
Cliftonville supporters do not require tickets and can pay cash at the turnstiles
Adults: £11
Concessions: £7

Cliftonville Members Tickets, Season Tickets and Family Tickets are NOT valid for this fixture.