He was on the bench for yesterday’s North Belfast Derby victory over Crusaders but, less than 24 hours earlier, Cliftonville goalkeeper Declan Dunne played a starring role as Northern Ireland Schoolboys commenced their Centenary Shield campaign with a scoreless draw against their Scotland counterparts at New Western Park, Renfrew.

After Dunne had denied Declan Walsh early on, his Solitude team mate Caomhin McConnell went close to making the breakthrough at the other end, only to send his shot over the top.

The first-half ended with Dunne making a smart interception to stop Aidan McKeown teeing Sam Walker up for the opener and, after the interval, Cliftonville’s Aaron Donnelly saw a vital clearance fell invitingly for Daniel McKay, whose blistering strike was spectacularly turned over the top by Dunne. 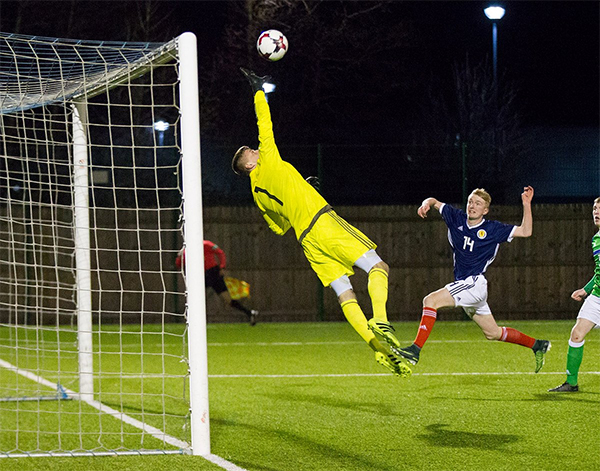 On 75 minutes, Donnelly’s cross almost provided an opportunity for Pablo Andrade to put Northern Ireland ahead only for home keeper Elliot Anderson to gather the danger.

From there on, it was opposite number and Man of the Match Dunne who returned to the fore with a fine stop from Gavin Scott ensuring that the visitors would leave with a share of the spoils.

Northern Ireland – who, in addition to Dunne, Donnelly and McConnell, also have Cliftonville’s Donal Rocks in their Centenary Shield panel – continue their campaign at home to Wales this Thursday.