Between them, they accumulated 682 appearances, scored 30 goals, presided over 350 games from the dugout and delivered nine honours – and this Saturday, Cliftonville legends Marty Quinn and Marty Tabb will be Guests of Honour at the Club’s Matchday Lunch.

Both were no-nonsense centre-halves who tasted success as players and Managers with the Reds and, as the 20th anniversary of the Club’s first Premier League title looms, no doubt the events of April 18, 1998 will be at the forefront of the discussion this weekend.

Between 1974-1981, Quinn became a firm favourite amongst Cliftonville fans and, in addition to playing a key role in that iconic Irish Cup success in 79, also lifted the County Antrim Shield and Gold Cup as well as being part of the first ever Reds team to compete in Europe when Nantes Atlantique provided Cup Winners’ Cup opposition.

After scoring 11 times in 286 appearances, Quinn returned to Solitude as Frankie Parkes’ second-in-command before assuming the managerial reins – initially on a temporary basis – on October 26, 1994.

He would depart precisely five years to the day later, having ended the Club’s lengthy trophy famine (which commenced with the aforementioned Gold Cup success of his playing days) by claiming the modest honour of the McEwan’s Soccer Sixes title in 1995 ahead of delivering the Coca Cola Floodlit Cup the following year, County Antrim Shield in 1997 and, of course, that never-to-be-forgotten Premier League crown 14 months later. 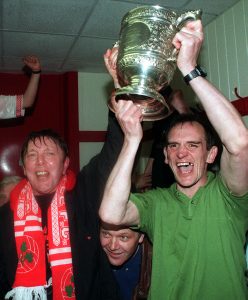 A mainstay in the team during that era was none other than Tabb, who had joined from Coleraine in 1991 and was part of the first ever Reds side to play in the Champions League. He would go on to register 19 goals in 396 outings before his appointment as Manager in the summer of 2002.

He would be in charge for 90 matches across two seasons and earned a notable milestone in the Club’s history when Cliftonville won the League Cup for the very first time when Larne were overcome in the 2003 decider at a rain-lashed Windsor Park.

Just as Tabber’s final game as a player came in the 1999/00 Promotion-Relegation Play-Off victory over Ards, so too did the end-of-season shoot-out provide his last fixture as boss when Armagh City were overcome 4-1 on aggregate in 2002/03.

You can hear both Martys’ tales from yesteryear on Saturday, when they will be in attendance at Cliftonville Bowling Club ahead of the Reds’ Danske Bank Premiership fixture with Crusaders.

The occasion – which will get underway at 12.30pm – will comprise a two-course lunch with wine, followed by tea or coffee and will include a complimentary Matchday Magazine, an intriguing Q&A with our title-winning duo and admission to the North Belfast Derby at 3pm.

Some tickets remain available and you can secure yours for £30, with a £5 discount for Members and Season Ticket holders, and anyone interested in attending is encouraged to make contact with Supporters Liaison Officer Michael Hegney (Phone: 07515506710; Email: michaelhegney@cliftonvillefc.net) as soon as possible to ensure you’re part of the celebrations as we toast our Champions of 1998.