Ruairi Harkin says it felt “amazing” to help Cliftonville to midweek victory over Warrenpoint Town – and he’s targeting another occasion to remember in tomorrow’s Danske Bank Premiership showdown with Linfield.

Making his first start since sustaining an anterior cruciate ligament injury in November 2016, Harkin played his part as the Reds emerged from The Q Radio Arena with full points and the 28-year-old is looking forward to making a long overdue return to senior action at Solitude this weekend.

“It felt really good to get back, it’s been a long time since I last started a game,” he says. “It was brilliant to be back and help the boys get the three points against Warrenpoint – it was amazing.

“(Linfield) is a massive game, we’ve been looking forward to it after the disappointment of last Saturday. There’s a been a few disappointments, especially last week, but there’s a lot to play for – Europe being one, which is a massive target for us.”

You can read the full Harkin interview in tomorrow’s edition of our Matchday Magazine, which will be on sale at Solitude for £2.50. 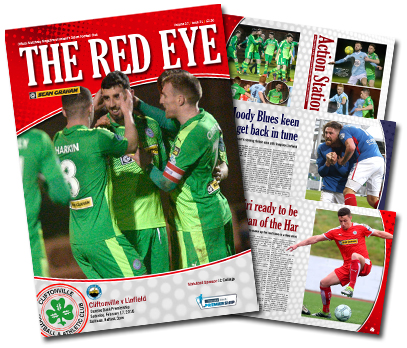 Alongside boss Barry Gray’s pre-game views, The Red Eye’s 21st issue of the season reflects on the Blues’ bid to finish the campaign strongly, welcomes a new signing to your poster collection and steps 84, 67 and 12 years back down memory lane – plus plenty more besides.