How closely were you paying attention over the last 12 months?

You’ll have to be at your sharpest to get the better of Red Arnie when he presents his end-of-year quiz in the latest edition of The Red Eye as Cliftonville host Coleraine in their final fixture of 2017.

Featuring a mix of transfer questions, score recollections and opposition teasers, the 50-question test delves into each calendar month, challenging supporters young and old to demonstrate their knowledge on a wide range of subjects – so don’t miss tomorrow’s edition of our Matchday Magazine, which will be on sale at Solitude for £2.50. 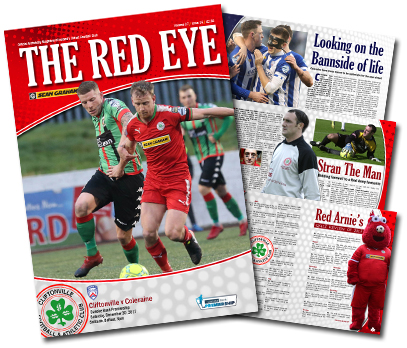 Alongside boss Barry Gray’s pre-game views, The Red Eye’s first issue since we marked the tragic loss of former player and coach Paul Straney casts a look back over the legendary goalkeeper’s time with the Club and reviews the Bannsiders’ season to date – plus plenty more besides.