Garry Breen says Cliftonville are acutely aware of just how difficult they have made life for themselves by starting games slowly this season.

Time and again, the Reds have found themselves behind early on and have frequently had to piece together second-half rescue missions after failing to heed their own gameplan during the opening exchanges.

Ahead of tomorrow’s Danske Bank Premiership clash with Linfield, central defender Breen says: “The gaffer has had a word with us about starting games on the front foot, rather than starting the second-half on the front foot but that will come.

“We should be further up the table than we already are, the boys took great confidence in our wins over Dungannon and Carrick but we need to put together a run of victories.

“We’ve won back to back games for the first time after beating Knockbreda and Carrick, so we need to keep moving in the right direction.”

You can read the full Breen interview in tomorrow’s edition of our Matchday Magazine, which will be on sale at Solitude for the new price of £2.50. 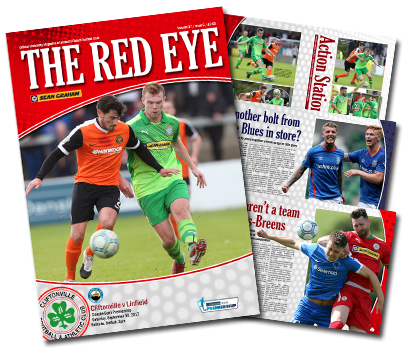 Alongside boss Barry Gray’s pre-game views, The Red Eye’s sixth issue of the campaign casts a glance at the Blues, provides supporters with the latest addition to their 2017/18 poster collection and takes our traditional steps down memory lane – plus plenty more besides.

Our Matchday Magazine, which has attained a top-three position in the NI Football Programme Collectors’ annual awards poll for the last six seasons, has undergone its first marginal price increase in many years to reflect its expansion in size and content and, if you’re not a regular reader, why not take a look at what you’ve been missing out on for the cost of just £2.50?