Stephen Garrett says Cliftonville will be inspired by recollections of their record-breaking League Cup run when they host Banbridge Town in this evening’s Second Round clash at Solitude.

The 30-year-old was part of the Reds squads that won four consecutive Finals between 2013-2016 and would love to enjoy further success in the season ahead.

“You never know when you will get the next opportunity to win a medal, so they are definitely memories we will cherish,” he explains.

“The first year we won it, we beat Crusaders 4-0 and I think it was the catalyst to going on and winning the title. We were confident we could put it up to teams on the big occasions and the following year we won on penalties and it gave us belief as we were chasing Linfield. It is a special competition to me.”

You can read the full Garrett interview in tonight’s edition of our Matchday Magazine, which will be on sale for the usual price of just £2. 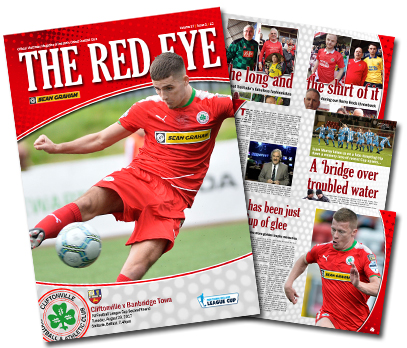 In addition to boss Barry Gray’s pre-game views, The Red Eye’s third issue of the campaign carries a full statistical breakdown of Cliftonville’s history with Banbridge and includes reports from the four previous competitive fixtures between the Clubs.

Supporters can also continue their 2017/18 poster collection and, alongside a review of the weekend’s Retro Reds initiative, we take a fate-tempting trip down memory lane through 34 years of being on the wrong end of Cup upsets.

Our Matchday Magazine has attained a top-three position in the NI Football Programme Collectors’ annual awards poll for the last six seasons so, if you’re not a regular reader, why not take a look at what you’ve been missing out?

Cliftonville Members Tickets, Season Tickets and Family Tickets are NOT valid for this fixture.