With a win, a draw and a defeat from three appearances thus far, Liam Bagnall acknowledges that Cliftonville are not yet firing on all cylinders – but believes that will not be long in changing under Barry Gray’s guidance.

The midfielder was reunited with his former Warrenpoint Town boss this summer and, as the duo prepare for their first taste of North Belfast Derby action when Crusaders visit Solitude on Danske Bank Premiership duty tomorrow, Bagnall believes the Reds will benefit from the expertise of the man in the dugout.

“I’ve worked with Barry for four years at Warrenpoint and I’m well aware of his methods and how he goes about things,” he explains.

“I agree wholeheartedly with the way he runs things in terms of giving it a hundred per cent and everyone with their shoulder to the wheel to see how far we can go.”

You can read the full Bagnall interview in tomorrow’s edition of our Matchday Magazine, which will be on sale at Solitude for the usual price of just £2. 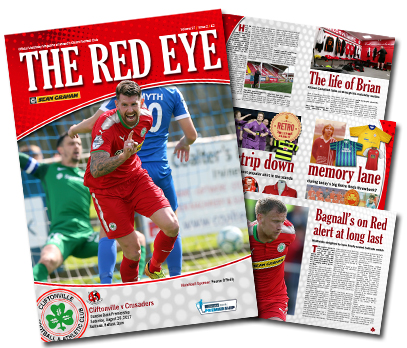 In addition to boss Gray’s pre-game views, The Red Eye’s second issue of the campaign delves into the archives to celebrate our Retro Reds initiative and, on the day that fans are encouraged to don their favourite or oldest Cliftonville shirt, we catch up with Kitman Brian Campbell for a behind-the-scenes look at a Solitude matchday.

Supporters can also continue their 2017/18 poster collection and, alongside a look at the visiting Crues, we take our traditional steps down memory lane, with Red Arnie posing his latest set of half-time teasers – plus plenty more besides.

Our Matchday Magazine has attained a top-three position in the NI Football Programme Collectors’ annual awards poll for the last six seasons so, if you’re not a regular reader, why not take a look at what you’ve been missing out?