The Reds kick their Danske Bank Premiership campaign off with a Solitude showdown against Ards tomorrow and goalkeeper Neeson – snapped up from Carrick Rangers in the summer – is raring to help lay down a marker for the year ahead.

“Cliftonville is a massive Club and any player coming here does so because they want to play in the big matches for the big prizes,” he explains.

“The Club’s fallen away from the top and it was strange seeing the way they crumbled after Christmas last season. Nobody wants a repeat of the way the last few years have gone and I think we’re good enough to make sure it doesn’t happen.”

You can read the full Neeson interview in tomorrow’s edition of our Matchday Magazine, which has undergone a slick transformation during the close season. 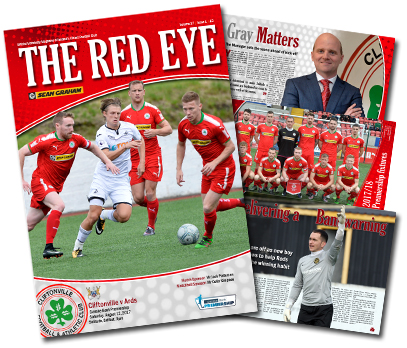 Available for the usual price of just £2, The Red Eye’s first issue of the campaign carries Barry Gray’s maiden managerial column, plus a heartfelt dedication to the late Dessie Kirkwood, a half-century trip down memory lane and the return of Red Arnie’s half-time challenge.

Supporters can also commence their 2017/18 poster collection using our Premiership fixtures guide and, in addition to a look at how visitors Ards are shaping up for the term ahead, we speak to striker Daniel Hughes about his hopes and expectations after being handed the number 9 jersey – and plenty more besides.

Our Matchday Magazine has attained a top-three position in the NI Football Programme Collectors’ annual awards poll for the last six seasons so, if you’re not a regular reader, why not take a look at what you’ve been missing out on by delving into our freshly-redesigned first installment of the new campaign?