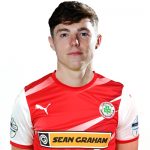 A pacey wide man with an eye for a trick, Thomas banked the 96th minute equaliser against Ballymena United in the County Antrim Shield Final of January 2020 before teeing up Ryan Curran’s winner just seconds later.

After suffering a broken bone in his leg during the early weeks of a loan period with Warrenpoint Town in the 2020/21 season, Thomas will spend the first half of the current campaign with the Milltown side.