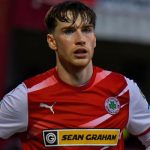 One of a host of new recruits in the summer of 2022, Mallon signed up at Cliftonville following a spell with Bohemians.

The left-sided attacker, who was previously on the books of Sheffield United and enjoyed loan spells with Australian side Central Coast Mariners as well as Derry City, is a former underage international who has represented both Northern Ireland and the Republic of Ireland from Under-15s though to Under-21 level.