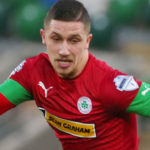 Signed on a pre-contract deal from Warrenpoint Town in January of 2019, Seanna has previously spent time on the books of Sheffield Wednesday, Linfield and Carrick Rangers.

An athletic full-back with a desire to get forward and support the attack, Foster has proven himself a willing deputy to Conor McDermott on the right side of Cliftonville’s defence.