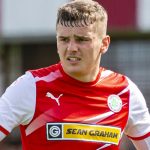 A summer 2022 arrival, Ronan joined Cliftonville from Larne less than a fortnight after making global headlines with an outrageous 80-yard strike that capped a four-goal display in the Invermen’s European Play-Off Final victory over Glentoran.

The switch to Solitude saw the former Birmingham City man link up with elder brother Rory for the third time in their careers, having also been team-mates at both Derry City and Crusaders.

Ronan, who spent a year at St Patrick’s Athletic prior to joining Larne in the summer of 2020, has been capped by the Republic of Ireland at Under-19 and Under-21 level and scored on his Reds debut when he hit the equaliser in a Europa Conference League clash with DAC at MOL Arena in Slovakia.