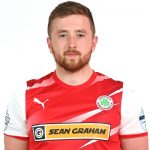 A player who was chased by a host of Clubs in the summer of 2019, Ronan is one of an increasing band of Derry natives at Solitude.

After stepping from the Ulster Senior League with Cockhill Celtic into the Premiership with Institute, ‘Olly’ scored his first League goal for the Reds in February 2021’s defeat of Larne and enjoyed a particularly rewarding spell in front of goal exactly 12 months later when he netted three times – as well as having another effort ruled out for offside – in back-to-back meetings with Carrick Rangers.