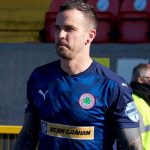 Signed from Ballinamallard United in the summer of 2018, the Birmingham-born goalkeeper enjoyed a fine debut season before becoming just the second Reds stopper in history to keep back-to-back clean sheets in European fixtures when Barry Town United were eliminated from the Europa League.

Following spells on the books of clubs such as Coventry City, Shrewsbury Town and Nuneaton Borough, Brush enjoyed a rewarding career in the League of Ireland, where he represented Sligo Rovers, Shamrock Rovers and Finn Harps prior to his stint with the Mallards.

In the early months of his time at Cliftonville, Brush demonstrated huge strength of character to return to the game after suffering a stroke while driving his car home from a match at Solitude and would be back in the team less than seven weeks after his horrific ordeal.