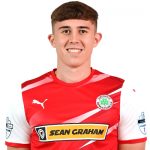 Signed from Glentoran on Transfer Deadline Day in January 2021, the striker was named Young Footballer of the Year at the 2019/20 NI Football Awards.

The Northern Ireland Under-21 international scored 17 goals in 67 appearances for the Glens after making his debut in April 2017 and wasted no time in opening his account for Cliftonville with a strike on his debut against Coleraine.