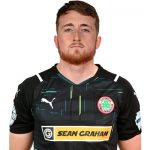 A summer 2022 arrival from Derry City, Nathan began his career with Institute before being snapped up by Watford, where he spent four-years including a brief loan spell with Chelmsford.