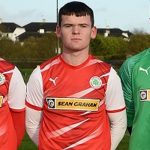 Morgan made his Cliftonville debut just a fortnight after his 16th birthday and has enjoyed regular involvement with the first team since catching Manager Paddy McLaughlin’s eye during a training session early last season.

A sharp finisher, he was denied his first goal for the Club thanks to a wonderful save during the Reds’ Irish Cup clash with Islandmagee in January 2022 but looks set to have further opportunities to break that duck having since signed his first professional contract.