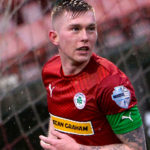 Now in his third spell at Solitude, McKee was part of the Cliftonville Football Development Centre prior to a move to Stevenage, for whom he made 33 appearances following his professional debut in April 2017.

He briefly returned to the Reds during the 2019/20 season and, after a spell on the books at Warrenpoint Town, signed up at Cliftonville again on Transfer Deadline day in the summer of 2020.