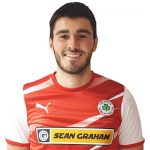 After enjoying a stellar season on loan from Aberdeen last year, Turner put pen to paper on a permanent deal with Cliftonville on the eve of the 2021/22 campaign.

A stylish defender who can operate both in the middle and on the left, the Republic of Ireland youth international began his career with Manor Town in his native Dublin and had spells on the books of Lourdes Celtic, Shelbourne and Cherry Orchard before joining the Shamrock Rovers Academy.

After his move to Aberdeen in 2018, Turner enjoyed loan spells with Turriff United and Wexford before arriving at the Reds, where his performances earned him not just the Club’s 2021/22 Young Player of the Year award, but similiar accolades from the NI Football League and Football Writers as well as being named Ulster Young Footballer of the Year.