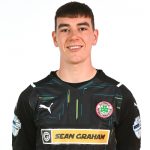 On loan from Sligo Rovers, Mayo man Luke is a former Republic of Ireland Under-18 international who began his career on the books of Manulla.

Highly regarded by his parent Club, the young goalkeeper – who had a loan spell at Finn Harps in early 2021 – featured in both legs of Sligo’s Europa Conference League tie with FH in the summer.