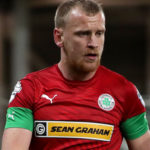 A tough-tackling central midfielder with an incredible work ethic, Bagnall captained Warrenpoint Town to the Championship title in 2016/17.

Formerly on the books of Glenavon, Sunderland and Darlington, Bagnall earned the questionable distinction of being the only Cliftonville player to be sent off during the 2019/20 season after receiving red cards against both Linfield and Carrick Rangers.