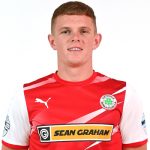 A product of the Torquay United academy, Ives was voted Cliftonville’s Player of the Year for the 2016/17 season.

He made his 100th appearance for the Club in a January 2018 victory over Dungannon Swifts but endured a frustrating 2019/20 campaign when a recurring metatarsal injury kept him sidelined before flaring up again in the early stages of his return for the 2020/21 term, but the tenacious full-back made an earlier than expected comeback in the closing weeks of the season.

He entered the following year resolving to play every game as though it was his last – and his performances reached all new heights as he put the frustrations of previous campaigns behind him with a string of wholehearted displays en route to helping the Reds win the League Cup and finish second in the Danske Bank Premiership.