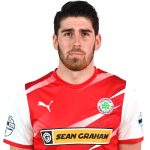 Signed from Dungannon Swifts in January 2021, Lowe arrived at Solitude with a wealth of Premiership experience under his belt.

A midfielder who can feature in a variety of positions across the middle of the park, the Omagh man – who has also demonstrated his capabilities in defence with Cliftonville – came through the ranks during a 10-year spell at Stangmore Park but has since firmly established himself as an integral component in the Reds’ team, where he has predominantly operated at right-back.