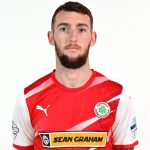 A player who has been on Cliftonville’s radar for some time, the Club finally got their man when assist king Jamie was snapped up from Glentoran prior to the 2021/22 season.

A tricky winger with a fierce delivery, the former Derry City man’s outrageous strike for the Glens against Cliftonville in January 2021 was voted NIFL’s Goal of the Season – and his penchant for eye catching finishes continued at the Reds, with a sensational volley against Ballymena United the pick of his maiden campaign goals.