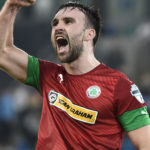 A loan deal with Colchester United was made permanent ahead of signing for Cliftonville in the summer of 2017, since when the former Northern Ireland Under-21 international has established himself an integral part of the backline but has not been shy about popping up with goals at the other end – as an unlikely hat-trick in an Irish Cup defeat of Warrenpoint Town in January 2019 attests.

before his arrival to the Reds. The defender is a former Northern Ireland Under-21 International