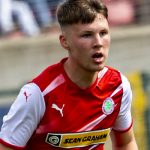 A midfielder who impressed as a trialist in the summer of 2021, Storey – whose senior career began with Portadown – joined Cliftonville a year later following a stint with Derry City.

A former Northern Ireland Under-17 international, the Belfast man moved to Portsmouth in 2019 and enjoyed a loan spell with Gosport Borough which ended when the Southern League was halted by the Covid-19 pandemic, facilitating a temporary switch to Carrick Rangers to maintain regular gametime.