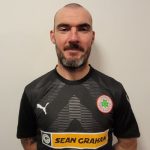 After beginning his career with his hometown Club Derry, Doherty – who was capped at Under-18 level by the Republic of Ireland – had a stint at Derby County before spending six years with Welsh Premier League side The New Saints, which included a loan spell with another of Cliftonville’s one-time European opponents, Barry Town United.

A decade back at Derry then followed ahead of his first taste of Irish League football with Crusaders, since when he has been back in the League of Ireland with Finn Harps prior to a January 2023 switch to the Reds.