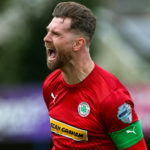 Signed from Portadown on a pre-contract agreement in January 2017, Breen quickly established himself as a key member of Cliftonville’s backline.

The Kilkenny man, who was formerly on the books of Manchester City and Dundalk, has popped up with a number of vital goals for the Club most notably a memorable injury-time winner when the Reds hit back from 2-0 down to defeat Linfield in September 2017.