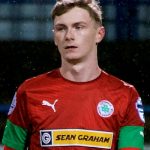 A graduate of the Cliftonville Academy, Teggart joined Portsmouth in the summer of 2018 and returned to Solitude on a loan agreement in January 2021.

Having featured for the Reds’ Under-18 side at the age of 16, Eoin has turned out for the Pompey first-team and Under-23s during his two-and-a-half years at Fratton Park and has also represented Northern Ireland at Under-19 and Under-17 level.