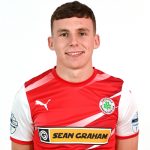 Having been forced to sit out the entirety of the 2020/21 season with an anterior cruciate ligament injury, a relapse extended Donal’s spell on the sidelines by a further year.

Another graduate of the Cliftonville Academy, the midfielder impressed after being introduced to the side at the end of the 2018/19 term and spent the first half of the current season gaining vital Premiership exposure in a loan deal with Newry City.