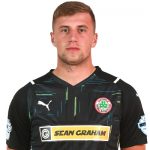 A former Northern Ireland Schoolboy international, Declan spent the 2018/19 season on loan at Portadown having made his Cliftonville debut at the end of the previous campaign.

He found himself thrown into the team in the closing months of last term and demonstrated his ability with some reliable performances.