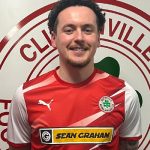 On loan from Ballymena United until the end of the season, David came through the Maiden City Academy and had a spell at Sheffield United before undertaking a number of loan moves ahead of putting pen to paper with Derry City.

Capped by Northern Ireland at Under-21 level, Parkhouse – who was named in the PFAI Team of the Year as well as being nominated for the PFAI Young Player of the Year in 2019 – signed for Ballymena at the beginning of the 2021/22 campaign but will play out the remainder of the current term with the Reds.