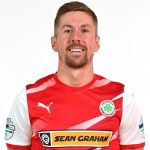 After coming through the ranks at West Ham United, Kearns spent a productive season with Dundalk before commencing three years at Peterborough United.

During his time at London Road, the Belfast-born underage international – who represented both Northern Ireland and the Republic of Ireland at various levels – enjoyed loan spells with York City, Rotherham United and Chesterfield before sealing a switch to Carlisle United.

His first taste of the Danske Bank Premiership came when he joined Glenavon for the 2015/16 season and, following stints with Sligo Rovers and Limerick, returned to the Irish League in 2018 when he penned a deal at Linfield, for whom his last act came as an unused substitute in a 4-3 defeat to Cliftonville just four days before joining the Reds in late January 2021.