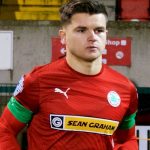 Once dubbed “The Irish Messi” following a string of standout performances in the League of Ireland, O’Connor put pen to paper with Cliftonville in October 2020.

The winger, who was most recently with Cork City, began his career with UCD and has represented the Republic of Ireland at Under-19 level.